The History of 1920s Makeup in Film

Advances in 1920s makeup played a significant role in defining a woman’s beauty.

We can’t deny that the 1920s were the decade which ushered in modern fashion.
Until the end of World War One, a woman’s most common makeover routine was a powdered fair face, and mascara on the eyes.
Makeup before the 1920s was a challenge to apply, due to the fact that the technology of products as we know them today hadn’t been developed yet.
Women would often create mascara with ash and India ink,  burn wood, lampblack, and other quite toxic self made products, then apply this concoction to their eyelashes.

The New Standard of Beauty

For most part, many societal factors played into the development of 1920s makeup and who wore it.
The female celebrities of the 1920s certainly had a lot to do with its the looks and use of most products of the era, and the trends setting.
Women in the Screen wore makeup as part of their characters , and to enhance or correct their features “on screen,” and the fact of the change in the film color.

By the time the industry converted to panchromatic film in the 1920s – the rules established for blue-sensitive film had to be changed – the industry would call on this specific expertise to help it resolve the new make-up challenges that arose from its introduction. The wide scale use of panchromatic film led to the development of make-up specific for the new film stock, increased the standardization of make-up and took make-up out of the actor’s hands and into those of the studio.

Most early black and white silent movies were made using blue-sensitive or orthochromatic film. These film stocks were insensitive to red light which meant that, in early black and white movies, reds looked black and natural skin tended to look dark and dirty on the screen. Applying stage make-up in the traditional way proved to be a problem and many screen actors resorted to using bright blue, green and/or yellow make-up to achieve a suitable result. Lets talk about the changes in light in the 20’s witch had a great impact on the screen and the selection of make up

and it was used in some American films as early as 1918, it would not be until 1922 that an entire film (The Headless Horseman, Sleepy Hollow Corp.) was completely shot with it.
Although panchromatic film had a wider spectrum sensitivity than blue-sensitive or orthochromatic film, its use was constrained by it being less stable, slower, and more expensive in comparison. Some cinematographers put up with these limitations and used it for outdoor shots because it produced superior images of landscapes and clouds (Bordwell, Staiger & Thompson, 1985, p. 283).In 1923, Eastman Kodak began commercial production of a new, more stable, and faster panchromatic film and then, in 1926, lowered its price to a level that was similar to the blue-sensitive film it also produced. The switch by Hollywood from blue-sensitive or orthochromatic to panchromatic film was very rapid after that.

The adoption of sound recording after 1927, resulting the replacement of arc lamps by tungsten lamps in the studios, also played a role, as did the release by Du Pont of its panchromatic film onto the American market in 1928, and the introduction by Eastman Kodak of Cine Panchromatic Type II film in the same year (Mees, 1954, p. 126). By the time Eastman Kodak introduced its Super-Sensitive Cine Panchromatic film in 1931 the conversion was largely complete.

In 1927, some studios who were using panchromatic film began to switch their lighting to incandescents – also known as Mazda lamps or ‘Inkies’. These lamps produced light across the full spectrum, unlike Cooper-Hewitt mercury-vapour lamps that produced light predominantly in the blue-green end. They were more portable and – because they used less current, required less maintenance and were easier to change – they were cheaper to run (Bordwell, Staiger & Thompson, 1985, p. 294). Incandescents were also much quieter than arc lamps, a factor that became important after the introduction of ‘talkies’ in 1927.

As there was no industry standard for incandescents, the Technicians’ Branch of the newly formed Academy of Motion Picture Arts and Sciences proposed that lighting tests be conducted.

1929 ‘Inkies’. The firm of Mole-Richardson was formed in 1927 and quickly became the chief supplier of incandescent lighting to Hollywood. The fact that the lamps operated silently became an important consideration after the introduction of sound in 1927.

With the development of the pharmaceutical industry and advancing marketing practices, the makeup market flourished (Like many products in the 1920s).

For most part, before the mid 1910s, a refined woman did not wear lipstick. But as with the eyes were accentuated, a woman’s lips were a defining feature of beauty and a sing of independence in the 1920s.
In the Flappers stile they were known for applying lipstick in public, an act that would have been considered inappropriate before the 1920s.
Businesses like Max Factor and Elizabeth Arden grew and began developing and selling new makeup products:

• Dark mascaras and eye liners to define a woman’s eyes. Typically women would line the entire eye for maximum definition.
• Different shades of eye shadow (browns for eyebrows, blues, greens and teals for the eye lids and brow bones) to accentuate the famous “Flapper Look”
• Lipstick in tubes. Various shades for the famous deep red “Cupid’s Bow” (Heart-Shaped) lips.
• A Popular makeup brand which made its mark in the 1920s was Tre-Jur – under the lead of cosmetic entrepreneur Albert Mosheim. Other
notable makeup brands who joined the ranks of Tre-Jur, Max Factor, Coty, Rubinstein and Arden in the 1920s included Tangee Lipsticks (1922), Peggy Sage (1925), Charles of the Ritz (1926) and Bonnie Bell (1927), Kissproof (1927)

The flapper had an unmistakable look. The long locks of Victorian women lay on the floors of beauty parlors as young women cut their
hair to shoulder length. Hemlines of dresses rose dramatically to the knee. The cosmetics industry flowered as women used make-up in large numbers. Flappers bound their chests and wore high heels. CLARA BOW, Hollywood’s “It” Girl, captured the flapper image for the nation to see.
Many wondered if flappers were expressing themselves or acting like men. Smoking, drinking, and sexual experimentation were characteristic of the modern young woman. Short hair and bound chests added to the effect. One thing was certain: Despite the potential political and social gains or losses, the flappers of the 1920s sure managed to have a good time.
Acording to: http://www.ushistory.org/us/46d.asp

Most women did not go for the so called flapper look – but instead the idea of facial contouring was gaining interest and soon 1920s makeup and
beauty books displaying detailed tutorials for women were being sold. One notable makeup tool that appeared in the 1920s was eyeliner – inspired by the huge interest in all things Egyptian, following the discovery of the tomb of Tutankhamun.

Make-up comparison showing one idea of how to make-up for black and white films. There were a number of experiments with colour film systems through the early part of the twentieth century. Unfortunately I do not know what type this make-up was design for.

1928 The Academy of Motion Picture Arts and Sciences report on Incandescent illumination. The following is the make- up report delivered by David Factor (he changed his name to Max Factor Jr. after his father’s death). “At this occasion we wish to take time to express our sincere appreciation for the opportunity given us to work with you during the recent series of tests at the Warner Bros. studios. We thought it might be well to give briefly our opinions and findings regarding the effect of make-up when used under Incandescent lights with Panchromatic film.
At the beginning we watched the “rushes” of tests made under various conditions by a number of cinematographers and with make-up that was being used for other types of lighting, for both Panchromatic and Orthochromatic film. We noticed that almost every subject photographed was rather spotted and in some cases the lips were either very light or exceptionally dark. The lining of the eyebrows with the usual black pencil photographed harsh and was exceedingly conspicuous. We also noted that most lines under and above the eyelids would pick up rather sharp, thus forming a displeasing outline around the eye. Various shades of lining was used to shadow the upper eyelids, and it was very hard for us to determine just what colors were used.

We also advised the total elimination of all pink make-up and black lines around the eyes.We also noted that the results from the brown lip rouge and dark eye-shadow were sometimes light and sometimes dark.

We particularly invite your attention to the manner in which the features of the face blended. The photographic value of the pigments used in the preparation of these make-ups, were such that the resulting subject on the screen was soft and the texture of the skin itself photographed natural, eliminating all possibility of unnaturalness.

The pigments used in the preparation of the make-up are balanced to the same degree in both the grease paint and the powder. As a result the color of the powder is the same as the grease paint. Ordinarily a powder lighter in shade than the grease paint was used, and the performer, after repowdering three or four times a day, had his make-up become lighter each time. At the end of the day the cinematographer was photographing performers in lighter make-ups than that which they had in the morning. But now, through the balancing of the pigments, the photographic value of the make-up does not change no matter how many times repowdering becomes necessary.

Max Factor was also concerned about the psychological effect on the actors and, unlike make-up of earlier times, attempted to keep the new panchromatic make-up as natural looking as possible.
All in all, Max Factor came out very well from the Mazda tests. An already strong relationship between the company and Hollywood was strengthened. The award presented to him in 1928 by the Academy in ‘recognition of his valuable service’ was a bonus.

For a lot more information on the subject please go to http://www.cosmeticsandskin.com/cdc/panchromatic.php

New beauty standards sprung quickly from the pale “Asian” look of the early 1920s, the garconne styles of 1925, and the femme fatale at the end of the decade.
The rich colors of the era’s paintings helped influence the colors of 1920s makeup and the sharp edges of 1920s hairstyles. 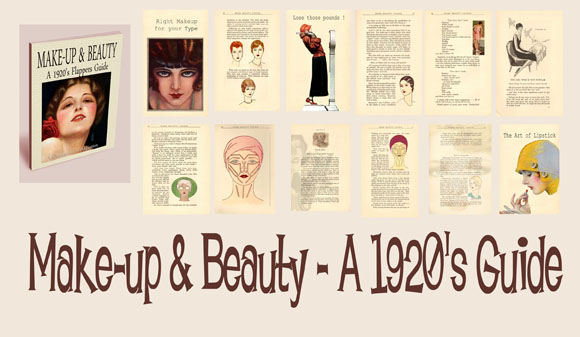 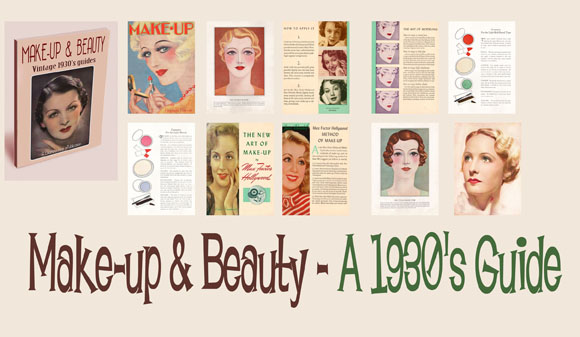 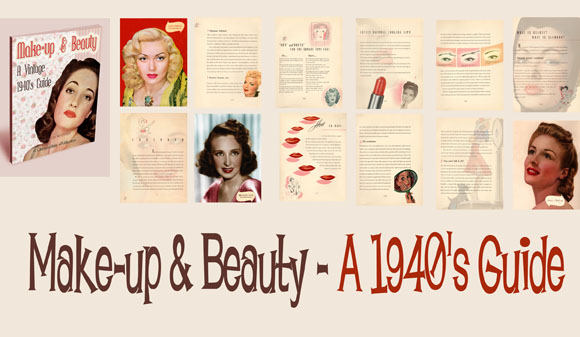